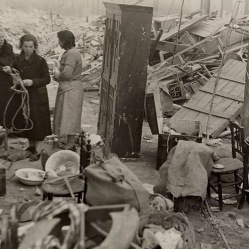 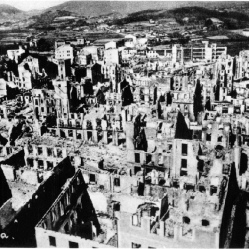 26 April 1937 – Guernika-Luma, a Basque town of 7,000 people, entered the history books when it was attacked by the German Condor Legion (aided by the Fascist Italian Aviazione Legionaria) fighting on behalf of Franco’s Nationalist forces. The small town of Guernica, in the Biscay region of the Basque Country was a communication hub for the Basque fighters, who had sided with the Republican forces since the outbreak of the Spanish Civil War. Guernica, the spiritual home to the Basque people, became a target for a sustained and pre-panned terrorist bombing, where civilians, not military targets, would be bombed, to inflict devastation and murder. Operation Rügen would go down in history as a horrific slaughter of innocents which would shock the world, and single itself out as a vile test run for what Germany would inflict throughout Europe only a few years later.

Guernica is a town just inland from the Bay of Biscay, and just 30 kilometres from the Basque capital of Bilbao. The area had been under intense stress from the War of the North, carried out by the Nationalists in the months leading up to the bombing, hot on the heels of years of struggle for the Basque people. Guernica is the home of the Gernikako Arbola (Tree of Gernika), the symbol of freedom to the Biscayan and Basque people. Guernica was also home to a manufacturing plant which produced firearms to the police and military, which became a vital resource during the Spanish Civil War, when the Basque Army supported the Republicans’ cause over Franco’s Nationalist rebels.

By April 1937, the Basque Country was under constant bombardment by the Nationalist advance, coming at them on all fronts. The small Basque Army, set up by the independent Basque Government, sought to protect the Biscaya and Guipuzcoa regions. With the Basque capital of Bilbao only 30 kilometres west, Guernica was vital in protecting the capital, and also a point where Republicans could retreat to if needed. Throughout the war, Guernica had no seen direct front-line fighting, though 23 Basque battalions were now nearby to the east. The area had no airforce protection, no air base and only room to house two battalions if needed.

The attack on the Basque Country has been planned a month earlier by Franco, in conjunction with murderous General Mola, who lead the northern army, along with the German Condor Legion. The town of Durango suffered civilian bombing on March 31, part of a test run of killing innocents, and troops starting pouring into the region. Many people sought refuse in the town of Guernica, away from the fighting. But eventually, there was nowhere else to flee as the Republian and Basque fighters were slowly beaten back by the Nationalist forces. General Mola planned a devastating attack on Guernica, all done with Franco’s blessing. They planed for 21 German and three Italian bombers, carrying 22 tonnes of bombs, to be dropped on innocent people.

Monday was market day in the town of Guernica. While market days had been largely banned or discouraged in the region for safety, people still needed supplies. Monday 26 April was a typical Monday market day which could see up to 10,000 people in the town from surrounding areas, all in the main plaza. Coupled with around 1,000 refugees from the area, the town was full, the roads more congested than usual. 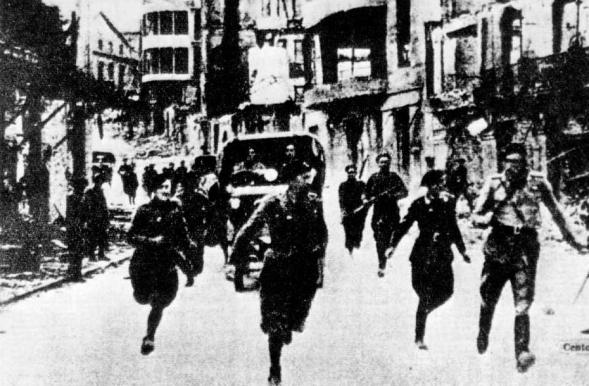 At 4.30pm, the first wave of bombers came from the north from over the Bay of Biscay, along the Urdaibai estuary which connects Guernica to the sea. The initial plan was to cut off bridges to block movements in the area with two 50 kg bombs, while the Italian bombers dropped another 36 50kg bombs on people. The first wave took only a minute, destroying bridges and the San Juan church and Republican Left headquarters, as the people of the town looked to take cover in panic. For the next 90 minutes, another four waves of attack would fly over the town, this time dropping bombs at random, killing innocent people, all cowering for cover in a town overfilled with people trying to buy and sell food. Guernica had no strategic assets to be captured, nor had seen any major wartime fighting, and was totally obliterated without warning or reasoning.

The people of Guernica were given 30 minutes of silence at around 6pm, thinking the bombing was complete. But by 6.30pm, the bombers were back in formation again, spread out over 150 metres, to drop the remainder of their arsenal. Then in came German biplanes, to bomb streets leading out of the town and machine-gun down people fleeing the carnage over a brutal 15 minute period. This cruel attack on civilians would have a larger impact than Franco could have anticipated.

This short space of time saw 75 percent of the town reduced to rubble. While the raid was considered a failure, as it was supposed to have been a military, not civilian attack, to bomb the area and cut off the Republican fighters from communications and reinforcements in Bilbao. As a result for the killings, within days, the Nationalists were able to swarm the area, not that they was much left to ‘conquer’. The firearm manufacturing plant was saved, as planned, along with the Gernikako Arbola (Tree of Gernika) and its government building. The town had become a testing ground for what would go on to be labelled carpet bombing, or blitz bombing, a popular tactic by German planes.

News quickly spread about the horrific acts at Guernica. First spreading through Europe and then the rest of the world, the Nationalists were branded as murders and barbarians (which should have been obvious already) as the blatant killing of innocents became apparent. Franco quickly had to have the propaganda dialled up, and denied the Nationalists’ own involvement, and claimed the Republicans destroyed the own town and killed their own people while in retreat from ground troops. Germany claimed no knowledge of the attack, claiming to have bombed a strategic bridge, the rest nothing to do with them. No such luck; journalists in the area were quick to file stories on the truth of Guernica.

But in the aftermath, the death toll was hard to quantify. The Basque government were unable to do much in way of assistance as Nationalists forced swarmed the area, and they made no attempt to calculate the dead and injured. Many left to die in the rubble were never accounted for, likewise the number of people who fled the region, never to return.

For decades the number of killed sat at 1,654, another 889 injured. A British journalist for The Times was in the area, and also came up with similar numbers. These incorrect figures became commonly adopted as accurate, though with the Nationalists not helping the wounded when then they invaded, and without proper funerals and records, there was no official death and injury toll. Even in the 1970’s the Nationalists were still denying everything and claimed only a dozen people were killed. Without further details coming to light over the years, historians now recognise the number of dead about approximately 300. A comprehensive study in the region in the 1980’s suggested 153, based on what records survived, with another 592 people who either died or recovered in Bilbao’s nearby hospital. While in context with many atrocities which occurred in Europe over intervening years make the numbers appear ‘small’, the casualty rate per bomb was much higher than many carpet bombings to come in the future, setting Guernica apart for yet another reason.

British journalist George Steer reported the story to the world, Guernica on the front pages in England for over a week as the horrors emerged. Cartoons emerged of the Basque ‘holy city’ being crushed by Hitler and his bloody swords in the US. The fact Guernica had no military targets quickly turned on the panic in many around the world, as people realised nothing was safe anymore. Guernica became a symbol of international horror and innocent suffering as deviant fascists sought to kill and destroy all in their way.

On the 60th anniversary of the bombing, Germany formally apologised for their role in the massacre, and in 2003, Guernica was commemorated alongside Dresden at the own commemorations, for suffering such a similar attack, but far less honoured and remembered. On Guernica’s 70th anniversary, officials in Hiroshima spoke of Guernica’s legacy in line with their own experiences. It has been suggested that Guernica be the world capital for peace.

For all the historical significance, the destruction and most importantly, the death toll, Guernica is probably best known internationally due to the Picasso painting of the same name. Picasso, living in exile in Paris, had been commissioned for war painting three months prior, and when he hard of Guernica, all of Picasso’s ideas were scraped for the depiction of those suffering. To Picasso, to bomb women and children was  to victimize humanity. The painting was complete by June 3. In black and white, the painting shows innocents dying, along with the Spanish symbols of the horse and bull, as Spain is ruined, along with tiny symbols of hope trying to shine through while destruction comes from all angles. When German soldiers came into Picasso’s Paris apartment years later during WWII, and was asked if he did the work, he told the Nazi’s – ‘no, you did’. Guernica traveled the world but was not able to return to Spain until 1981 when freedom was achieved for the Spanish people. It now sits in the Reina Sofia gallery in Madrid (if you haven’t been, you should).

After the bombing of Guernica, the town was in flames, seen 10 miles (16 kilometres) away, according to George Steer, as buildings continued to crumble and crush the injured and trapped. Yet, pilots who belonged to the Condor Legion, whom Franco let practice on his own people, received a mausoleum in La Almudena in Madrid. Many vicious men from the war were revered in Spain, these plaques and statues and memorials removed over the years. To mark the 80th anniversary of Guernica, the mausoleum in La Almudena for fallen Condor Legion pilots was quietly removed, to be replaced with simple names. No more “Here rest the German pilots who fell in the struggle for a free Spain. German aviators who died for God and for Spain”. The plaque had been removed in the past but had been quietly replaced by those who still love Franco and all that happened in his name.  It has taken 80 years for this last sign of pro-German acts to be removed. The wounds on Guernica will never fully heal.

This is not a detailed analysis, just a highlight (lowlight?) of the events. Things get lost in translation – Feel free to suggest an addition/clarification/correction below. The more the world remembers, the better. All photos and captions are auto-linked to source for credit, and to provide further information.