In 1936 Esmond Romilly, nephew of Great Britain’s ‘War Chancellor’ Winston Churchill and outspoken pacifist, went to fight with the International Brigades for the democratically elected Spanish government against the insurgent fascist general Francisco Franco. This is the unheroic, unsentimental account he wrote immediately after the fighting, fresh and personal like no other, spiced with dry English humor.

There have been other records of the part played by the British members of the International Brigade at the siege of Madrid. But Mr. Romilly’s is the most full. He is one of the two survivors of the original ten British volunteers attached to the Thaelmann Battalion in the early days of the war. So his book has its place in the annals of the contemporary struggle for liberty. He writes easily and simply. There are occasional breaths of Hemingway, but in the later chapters especially he displays a detached casualness—unusual in so young a writer (Mr. Romilly is nineteen)—that is genuinely dramatic and moving. Without heroics he conveys the feelings of those untrained enthusiasts (the author’s military experience was confined to refusing to join his school O.T.C.) suddenly plunged into a battle fought apparently at random. Caught between a cross-fire, the little group was almost wiped out. Their bodies were never found.

cover art and blurb via amazon and spectator

As mentioned a few weeks in ago in This Week in Spanish Civil War History – Week 25: 1 -7 January 1937, the battles for Corunna Road and the fight to take the town of Boadilla del Monte, just outside Madrid, were chronicled by 19-year-old English volunteer Esmond Romilly.

The book starts off by promising to account the battle of Boadilla in a straight-forward fashion, as that it does. It tells a very simple story of what happened, all written while fresh in the author’s mind in 1937, as he holidays on honeymoon in France. Romilly came from a rich family, married in another rich family, but for a few months in late 1936 and early 1937, he fought to make ‘Madrid the grave of fascism.’ He had little stamina for the war, but he was an excellent example of unprepared men thrown into a poorly planned battle, so typical of volunteers in Spain.

The book starts with a background of all the main characters that Romilly met on the trip – Joe Gough, Harry Audley, Aussie Whateley, Jerry Fontana, Lorimer Birch, Arnold Jeans, Bill Scott, Tom Mann and Martin Messer. It seems in this short time, Romilly got to know these men very well. After the battle to claim Boadilla, he would go home alone.

The early chapters show him working to get by in France as he makes his way south, arriving in Spain by ship at Valencia. The Albacete training bases had been set up by this time. Romilly describes this as playing at soldiers. He had no idea how to use a rifle, couldn’t speak any Spanish and was constantly suffering dysentery. He met many Germans, Latvians and French men, as well as his fellow Englishmen, and the story tells of the usual difficulties marching with supplies and being hot, of the whole thing having a ‘field day’ atmosphere while away from the front. Romilly has given some people assumed names, most those who were German or went to Germany after the war (it was illegal for Germans to aid the Republicans. Those returning home were jailed).

One thing that stood out was Romilly being told by French communist André Marty that the Republicans needed three things to win the war – political unity, military leaders with experience, and discipline. They had none of these.

Romilly uses assumed names for the towns of his initial battles. Battle starts in chapter 5 when out of nowhere, Romilly finds himself under fire, his first reality in the civil war just south of Madrid. As soon as they hit the front at ‘Noreno’, Romilly gets lost under darkness, and ends up walking miles the wrong way, meeting up with others, and eventually making their way to ‘Melilla’ (thought to be Villaconejos. No one know why Romilly changed the town names). Though as dawn air raids strike, the men are lucky to have gotten lost and in the wrong town.

Romilly seems to run around, never really having a clue what is going on, where they are heading or what to do. Dysentery is the one thing everyone shares, and the bitter cold of being up on the plain around Madrid really hits home, with only those prepped by anarchists in Barcelona are ready for it, as the rest of the Thaelmann Battalion have to struggle on.

The battalion team up with the Garibaldi battalion and thrown into fighting in University City on the northern tip of Madrid. Romilly recalls seeing Moorish soldiers shooting into trenches were his comrades were, their bayonets slashing at those trapped but not killed. He details his time fighting in University City very well, saying the night smelled night ‘dead men, crackling flames and drizzle’.

Romilly soon is in Madrid at the Ritz, swirling brandy and bathing again. He gets eight days’ training in the town (now suburb) of Fuencarral north of Madrid, before heading back to Majadahonda, a village (now suburb) west of Madrid. Now the battles for Corunna Road and the surrounding towns are all on, and Romilly is sent to hold the tiny town of Boadilla. Under the air raids and against the well-prepped Nationalists, the whole battle falls into total chaos, of watching close friends die and running away in blind panic. One by one, as they retreat, Romilly’s friends are killed, not by the Moorish soldiers that anticipated, but by uniformed Spaniards.

Romilly is one of only a couple who survived Boadilla. He speaks of meeting English poet John Cornford along the way, another young Englishman, with his head bandaged. Cornford never made it out alive either. The few remaining living foreigners (just over a dozen volunteers from a combined Spanish and volunteer group of 15,000 at Corunna Road battles) made it to El Pardo (just outside Madrid) where they came to grips with the brutal losses.

Romilly was diagnosed with neuralgia, damaging nerves causing excessive pain, and was sent home, where he married Jessica Mitford, and then wrote the fresh accounts of the men left in the mud at Boadilla. Romilly went on to fight in WWII but died in 1941. 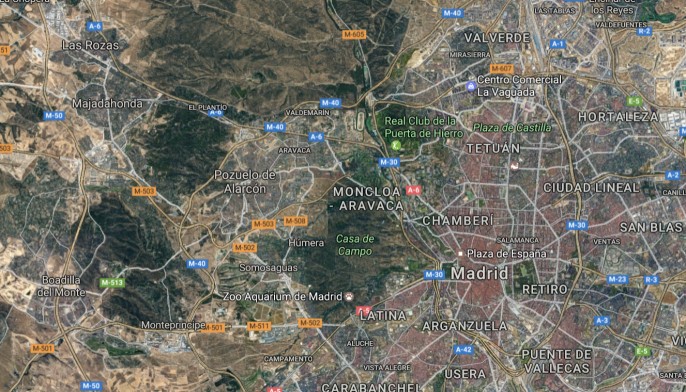 By the 25th week of the war, neither side would be able to say their plans had been executed the way they hoped. The Nationalists had hoped to invade, take Madrid and rule the nation within weeks or months. The Republicans came together, multiple factions with similar principles, hoping to oust the fascists. At no stage were they prepared enough to see through their goals. 1937 would see Franco’s plans to take Spain become more established. Franco had much help from Hitler and Mussolini, while the Republicans still had the Soviets on their side, due to the large Communist faction in Spain. But with Republicans made up of many groups and no one clear leader, divisions were one of the main forces at play in the war, with Anarchists and Communists splitting constantly from the Socialists and workers’ militias. As with all wars, the regular people were constant losers.

The third battle for Corunna Road, just northwest of Madrid city, commences.  General Orgaz Yoldi has gained more Nationalist reinforcements and begins the offensive, known as the Battle of the Fog. The Nationalists retake the town of Boadilla del Monte, as the Republicans are still suffering from their earlier losses. The Republican have five divisions working together, along with the XIV International Brigades, but have little ammunition and have to surrender the town and that portion of the crucial supply route of Corunna Road.

With surging numbers of Nationalist soldiers coming from the right, the Republicans have to retreat even further away from Boadilla del Monte and also lose the town of Las Rozas, just 11km north of Boadilla del Monte. The weather is at freezing point all day and night and the fog continues to make battle ever more difficult.

Some of the Thaelmann battalion prior to battle

As the fog lifts, the Nationalists, with 18,000 troops and air support, attack Pozuelo, where many Republican forces are in retreat. The Republicans run out of ammunition, including for the T26 tanks from Russia, which have destroyed 25 German tanks throughout the day. The Republicans have to scatter, without weapons or communication, being split by the attack. Republican General Miaja tries to get the German Thaelmann battalion of the XIV International Brigade back together, along with Lister’s Communist unit, in order to try to regroup. The Nationalists continue to widen their hold over Corunna Road and also take the opportunity to bomb the city of Madrid, mostly by day.

All of the XIV International Brigades are forced far back from Boadilla del Monte and the Nationalists have Corunna Road. They meet up with other Republican groups and are ordered to retake Las Rozas, but they lack the men or firepower to do so. Among the young foreigner volunteers was untrained machine-gunner 17-year-old Esmond Romilly, nephew of Franco-sympathiser Winston Churchill. (It was rumoured that Romilly was Churchill’s own son, Churchill having bedded his wife’s sister. The sisters’ mother was a notorious cheater, and their real father(s) is unknown. Several men are options, one being the grandfather of young Romilly’s wife – meaning the young couple were first cousins. The rich do like to make their own rules, and the family is fascinating/bizarre.)

The Nationalists bomb Las Rozas from the air, destroying the town and killing almost all the Republicans and International Brigades huddled nearby for safety. The locals of the town have already long fled, hiding in caves in the Hoyo de Manzanares mountains nearby. All but 35 Republicans are killed, those not killed manage to retreat wounded. Those foreigners who survived, such as young Romilly, are sent home with wounds and illness. Romilly went on to write a book named Boadilla, all about the slaughter of  the battle. The Nationalists are in total control of the area, and ready to begin their final push to control all of Corunna road. Both sides have now lost around 15,000 men each.

I’ll will post a review when I get the chance

This is not a detailed analysis, just a highlight (lowlight?) of the week’s events. Things get lost in translation – Feel free to suggest an addition/clarification/correction below. The more the world remembers, the better. All photos are linked to source for credit.