Prime Minister Negrín, holding a meeting at Figueres Castle, suggests a surrender to Franco, on one condition – those left living would be respected and they  could vote on how a new government would be formed. Franco does not accept this surrender.

The Nationalists who took Barcelona have made the 100 kilometres hike north and take Girona, which no longer has any Republican protection.

The Nationalist troops from Girona hike another 15 kilometres north, to catch up with any refugees still trying to escape to France. They are now only 50 kilometres from the border to France, and will close the border once they arrive. German planes are still bombing refugees from the air.

All Republican troops are ordered to get to the border and are now also allowed to cross into France, along with the hundreds of thousands of refugees trying to reach the border. On foot, or on carts or trucks, Republican Spaniards are facing sleet and snow to try to reach France.

The Nationalist troops finally reach the border into France. Between 400,000 to 500,000 Republican refugees have survived to get into France. The Republican president Manuel Azaña, Prime Minister Juan Negrín, Republican Army chief of staff Vicente Rojo, and Catalonian president Lluís Companys and his Catalan government have all made it over the border. Most people have crossed in the region have crossed at Le Perthus, but Prime Minister Negrín crosses back into Spain.

The final Republican troops of General Modesto’s Army of the Ebro cross into France, just in time, as the border into France is totally sealed by Nationalist troops. Anyone still on the Spanish side has to side with the Nationalists, or would be killed or oppressed. With Catalonia totally in Nationalist hands, the Republicans have lost 200,000 troops and the entire Catalan war industry. But the Republicans still hold thirty percent of Spain, and their Prime Minister is back in the country and confident they can continue to resist.

The 10.30am train arrives in Xàtiva Railway Station, sixty kilometres south from Valencia, carrying the 49th mixed brigade of the Republican army, to be transferred north. The station was also filled with family and friends of the troops when five Italian Savoia-Marchetti SM.79 bombers arrive from Mallorca and drop twenty 250kg bombs from 13,800 feet. The bombing makes a direct hit on the train, killing 129 people, 109  instantly. Most are troops, though 14 women and three children are also killed. A few surviving troops are still sent on to join other brigades, as the 49th was too decimated to continue with any plans. Another 200 people are injured in the brutal attack.

From Burgos, Franco publishes his Ley de Responsabilidades Políticas (Law of Political Responsibilities). The law states that anyone who opposed the Nationalist rebellion and coup in July 1936, and anyone a member of any Republican party from October 1934, is guilty of military rebellion (ironically). As the law is backdated to 1 October 1934, all Republican sympathisers and members can be prosecuted for aiding the Republican rebellion (again, how ironic).

The Ley de Responsabilidades Políticas punishes people with fines ranging from 1000 pesetas through to confiscations of all assets. Anyone prosecuted could also be punished with restriction of movement and activities, forced to live where appointed and possible loss of Spanish citizenship, depending on their level of Republican association. Anyone dead or disappeared (either as refugees in France or those killed and dumped in the war) will have their remaining family members prosecuted on their behalf. 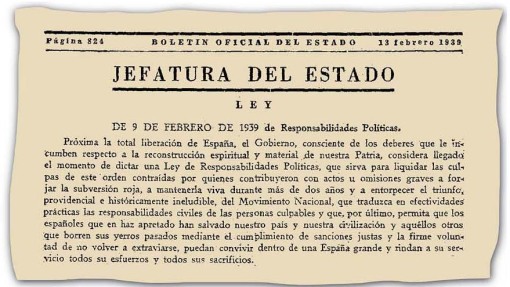 Both France and Great Britain  decide to end their role in the Non-Intervention agreement and recognise Franco and his Nationalist government in Burgos. With the threat of European war, and half a million Spanish refugees in the south, France has their border with Spain blocked, with Franco’s ally Germany also causing strife. France needs to focus on itself and endorses fascism in Spain, as Germany and Italy have done throughout the war.

Britain has less reason to endorse Franco. Labour leader Clement Attlee, Leader of the Opposition, is furious with Prime Minister Neville Chamberlain’s decision. He stated, the first voice to do so, that Britain was hypocritical after almost three years of “non-intervention,” yet their lack of intervention is instead the thing that has helped fascism spread through Europe.

Today marks the first of four days of successive bombing in Barcelona by Nationalist aircraft, with ten flyovers bringing bombs into the streets. After almost three years of war, Barcelona is weary, despite being far from the front until now. The Nationalists are fast advancing through Catalonia, with little or no resistance.

General Solchaga and General Yagüe’s Nationalist troops reached the Llobregat river, just a few kilometres west of Barcelona,  Generals Muñoz Grandes and Garcia Valiño attacked Sabadell and Terrassa, and General Gambara advances to Badalona.  Barcelona is now surrounded by the Nationalists and the three lines of defense set up around Barcelona, composed of all men aged 18 -45, with all the city’s industry militarised, cannot save the city. Prime Minister Negrín gets a call from the head of the Republican Army, General Rojo, to tell him that the frontline around Barcelona has been completely shattered.

The Republican government decides to abandon Barcelona as the capital and heads for Figueres Castle, and most of Barcelona’s political prisoners are released. Much of the population of the city is now fleeing north towards France, and the men on the frontline have either been killed or have retreated from advancing Nationalists. The aircraft overhead are still bombing Barcelona ten times per day.

One day after General Garcia Valiño’s men capture Manresa, the Nationalist vanguard takes the town of Tibidabo, the highest mountain around Barcelona, which overlooks the entire city. The Nationalists are now on the outskirts of Barcelona and all the defensive lines are gone.

Nationalist troops march through the streets of Barcelona, where General Yagüe’s  Regulares begin their execution spree. While Barcelona is ravaged, the Catalonia offensive is halted briefly, meaning many civilians who have fled north towards France have no advancing troops at their backs . But the German Condor Legion and and Italian Aviazione Legionaria  continue their campaign from the air, bombing towns and roads on the 160 kilometre hike to the French border.

The Italians send ten bombers to La Garriaga, and bomb the town over two days, though Republican troops are gone, leaving 13 civilian casualties; one local, five refugees and seven children. Bombing La Garriga’s train station means getting north is much harder for Republicans.

The French government, who announced they opened the border on January 28, start receiving the first of 400,000 – 500,000 refugees into the country, those who are first to make the walk through the snow. Republican troops are not yet permitted to enter, yet the remaining men are flanking the refugees on their dangerous walk, while the German Condor Legion continues to bomb them from overhead. Once the Nationalists reach the frontier, they plan to close the border, meaning there is nothing but executions and oppression for all remaining Spaniards who opposed the rebel invasion. They have only ten more days to make the freezing, bomb-ridden march towards France, while starved and/or injured and all traumatised.

Nationalist occupations continue in Catalonia, with General Solchaga’s men taking Les Borges Blanques, General Valiño and General Grande’s troops take Artesa, and Yague and his Moroccan Legionnaires manage to cross the Ebro. General Moscardo starts an attack from a base in Lleida, while the Italian troops join General Solchaga’s troops in Les Borges Blanques to continue the offensive towards Barcelona.

As the Catalonia Offensive takes up all of the Nationalist attention, the far-west Extremadura Republicans plan the Battle of Valsequillo, also known as the Battle of Peñarroya, 75 kilometres north-west of Cordoba over the Andalucia border. The XXII Corps led by Colonel Juan Ibarrola (the 47th Division, 70th Division, and the 10th Divisions, joined by Major Nilamon Toral, and his 6th, 28th and 52nd divisions ), combine to attack the border and capture Hinojosa del Duque, creating an eight kilomotre break in the Nationalist frontline. Within a day, they make it through another frontline to capture Fuente Obejuna, and  take Los Blazquez and Peraleda del Zaucejo by January 7.

The weather has changed in Extremadura, and while the Republicans have 90,000 men, the poor weather means their 40 tanks cannot advance any further in thick mud. The offensive needs to halt, but they have taken 500 square kilometres, though the land has no strategic value.

General Moscardo’s Aragon Army Corps combine with General Gambara’s infantry at Mollerussa, and break through a Republican frontline. The Republicans have their V and XV Republic Corps in the region, but they are beaten back in heavy fighting and are forced to retreat.

The Nationalist Aragon and Maestrazgo Corps combine and take the town of Cervera, forcing a rereat of any remaining Republicans in the area, who had been separated while fighting in Mollerusa. General Yague’s Moroccan Legionnaires march a full 50 kilometres in a single day, and occupy the hugely strategic town of Tarragona, only 100 kilometres from Barcelona. By this stage, 23,000 Republicans have been captured, another 5,000 soldiers are already dead.

The Nationalists in Extremadura and Cordoba begin their counteroffensive, bringing together 80,000 men to retake control of the area around Valsequillo.  They bring seven divisions (10th, 40th, 74th, 81st, 60th, 112th and 122nd divisions) led by General Queipo de Llano and spread out, quickly recapturing the town of Peraleda del Zaucejo.

With the Nationalists moving through Catalonia at a huge speed, Franco has planned a huge bombing attack on the city of Barcelona, set to take place over January 21 -23, with 40 attacks, an in attempt to destroy all defenses the Republicans have put in place. The Nationalist men on the ground are fast making their way in Barcelona, and the people of the city need to decide if they will stay and fight or run for the French border some 150 kilometres away.