Nationalist occupations continue in Catalonia, with General Solchaga’s men taking Les Borges Blanques, General Valiño and General Grande’s troops take Artesa, and Yague and his Moroccan Legionnaires manage to cross the Ebro. General Moscardo starts an attack from a base in Lleida, while the Italian troops join General Solchaga’s troops in Les Borges Blanques to continue the offensive towards Barcelona.

As the Catalonia Offensive takes up all of the Nationalist attention, the far-west Extremadura Republicans plan the Battle of Valsequillo, also known as the Battle of Peñarroya, 75 kilometres north-west of Cordoba over the Andalucia border. The XXII Corps led by Colonel Juan Ibarrola (the 47th Division, 70th Division, and the 10th Divisions, joined by Major Nilamon Toral, and his 6th, 28th and 52nd divisions ), combine to attack the border and capture Hinojosa del Duque, creating an eight kilomotre break in the Nationalist frontline. Within a day, they make it through another frontline to capture Fuente Obejuna, and  take Los Blazquez and Peraleda del Zaucejo by January 7.

The weather has changed in Extremadura, and while the Republicans have 90,000 men, the poor weather means their 40 tanks cannot advance any further in thick mud. The offensive needs to halt, but they have taken 500 square kilometres, though the land has no strategic value.

General Moscardo’s Aragon Army Corps combine with General Gambara’s infantry at Mollerussa, and break through a Republican frontline. The Republicans have their V and XV Republic Corps in the region, but they are beaten back in heavy fighting and are forced to retreat.

The Nationalist Aragon and Maestrazgo Corps combine and take the town of Cervera, forcing a rereat of any remaining Republicans in the area, who had been separated while fighting in Mollerusa. General Yague’s Moroccan Legionnaires march a full 50 kilometres in a single day, and occupy the hugely strategic town of Tarragona, only 100 kilometres from Barcelona. By this stage, 23,000 Republicans have been captured, another 5,000 soldiers are already dead.

The Nationalists in Extremadura and Cordoba begin their counteroffensive, bringing together 80,000 men to retake control of the area around Valsequillo.  They bring seven divisions (10th, 40th, 74th, 81st, 60th, 112th and 122nd divisions) led by General Queipo de Llano and spread out, quickly recapturing the town of Peraleda del Zaucejo.

With the Nationalists moving through Catalonia at a huge speed, Franco has planned a huge bombing attack on the city of Barcelona, set to take place over January 21 -23, with 40 attacks, an in attempt to destroy all defenses the Republicans have put in place. The Nationalist men on the ground are fast making their way in Barcelona, and the people of the city need to decide if they will stay and fight or run for the French border some 150 kilometres away. 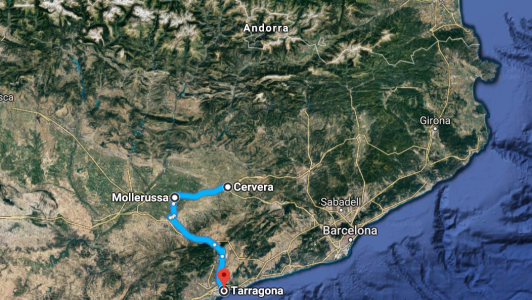