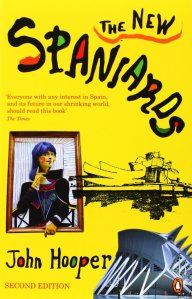 Modern-day Spain is a country changing at bewildering speed. In less than half a century, a predominantly rural society has been transformed into a mainly urban one. A dictatorship has become a democracy. A once-repressed society is being spoken of as a future ‘Sweden of the Mediterranean.’ John Hooper’s outstanding portrayal of the new Spanish society explores the causes behind these changes, from crime to education, gambling to changing sexual mores. This new, up-to-date edition is the essential guide to understanding twenty-first-century Spain: a land of paradox, progress, and social change.

The New Spaniards is a book which has sat on my to-read shelf for far too long. The second edition of this book got released in 2006, so by the time I pulled it from my shelf, I wondered if its information would be little irrelevant, given the changes to Spain in the past eight years. I could not have been more wrong.

So often mentioned in the same breath as Ghosts of Spain by Giles Tremlett, the book which pulled me from my slumber about Spanish history, The New Spaniards is a must read. The author brings together over 400 pages, creating a solid, credible and easy to read review of Franco and modern life. One chapter in, what immediately becomes clear is the efficient and clean writing style Hopper has; while other books on the subject can feel academic and stiff, the prose is fresh and makes the reader comfortable among a detailed and insightful presentation.

The book starts with a section of the Franco reign, from the years of hunger, the economic boom, the mass migration of Spaniards both abroad and within their own nation, and effects of the reforms made during the dictatorship. The 1970′s, once Franco had gone and democracy set in, is covered with excellent detail, without any confusion on what was undoubtably a dizzying time of change in so many ways. Then-young king Juan Carlos and Prime Minister Adolfo Suárez are well discussed, along with the placement of the young and the old to form a peaceful democracy. The changes made by the Socialist government in the 1980′s are well touched upon, their effect on the economy and the high unemployment rate (easy to identify with today), along with the stark changes in the 1990′s by successive governments.

Chapter 7 – Legacies, Memories and Phantoms – is an engrossing read, whether a reader understands Spain’s 20th century history or not. It explains how Francoism has not survived the passing of years, but a legacy has become ingrained in Spanish life. The pact of forgetting, which did not allow anyone to forgive or heal, is touched upon with honesty, as is Valle de los Caídos outside Madrid. Hooper’s accurate argument is that the omission of the civil war (and its mass graves) in school textbooks, because it is not old enough to be considered history, is an excuse wearing thin.

Part two sweeps in with a section on the churches’ role in Spain, along with the curious and absurd prudery of Franco and the changes to modern time, such with gay marriages. It makes an enlightening read for those less acquainted with subjects such as prostitution, abortion, contraception and gay rights in Spain. Another absorbing chapter is the death of machismo in Spain as women gain rights after being so deeply and cruelly oppressed under Franco. The fact Spanish women are still suffering sexism, like all nations, is also explained, with the all the relevant details to back up the claims. The role of family in Spanish life is given a thorough and honest portrayal, as are the changes in domestic violence and divorce laws which have changed the precious Spanish family for the better.

Part four sheds light on the autonomous regions of Spain, something not well understood by those not living in the country. The Basques, the Catalans and the Galicians are all opened up as Hooper shares their desire for self-governance, with all the information on the remarkably different laws and goals for their regions. (I wanted to wave the flag for the region of Valencia at this point, which has been trapped under their corrupt PP mayor for over 20 years). The book covers the how’s and why’s of the 17 autonomous regions of Spain, their individual paths to freedom, and what lies ahead for these proud places. I learned more about this process, despite having studied it in the past, a testament to the author’s respect for detail.

This book covers so many subjects that it can dizzying when looking back over all that is covered – from Spanish gypsies, to the welfare system, to the ups and down of the education system, housing and the booms and busts suffered, to the legal system, the media, the arts, but Hooper guides readers through every subject with a smooth yet meticulous manner, opening up each of these fundamental subjects. For me, one of the final sections on changing traditions was especially fascinating. Bullfighting is covered in-depth with an unbiased yet accurate voice. I have read much about bullfighting, but it can be hard to find anything written that does not either lean heavily in favour or against the art form. Regardless of your opinions on the subject, any reader can gain from the information shared by the author.

While much as happened politically, socially and economically to Spain since this book was written, it still serves to provide a clean, realistic picture of Spain and why the nation sits in its current form. The book shows how the past has shaped the present, and can also show that what Spain is currently suffering is not unique. Each generation of Spaniard has seen suffering, but also moments of hope in the time since Franco died. If anyone wanted to learn from the past mistakes, the tips to succeed could well lie in the words of John Hooper.

This book got first published in 1986, rewritten in 1995 and revised in 2006, and could be easily overwhelming if it was not so well planned and laid out. I have yet to find a book that captures Spain’s identity as well as The New Spaniards. It should be handed out to each person who arrives in Spain and plans to make a life there.

My only gripe is that my paperback copy has a tiny font! While this has nothing to do with the quality of the author’s work, I had a headache the entire time. I can understand a publisher’s desire to make the text small, with so much to give to a reader, but it was difficult to read. Going to a Kindle version and sizing up the text is needed for everyone with delicate eyes.

One thought on “SPAIN BOOK REVIEW: ‘The New Spaniards’ by John Hooper”