Today, the Puerta del Mar (Gate to the Sea) sits in Plaza Porta de la Mar, in a roundabout connecting six roads, including where the glorious Calle Colón meets its end against the Turia. But this gate has a long history.

Puerta del Real (Royal Gate) was the entrance to the city from Puente del Real, one of the city’s historical bridges. The eastern part of the wall around the city was built in 1574, when worries about Turkish attacks began. In 1599, the open entrance to the city was moved to align perfectly with the bridge, when the wedding of King Felipe III was held in Valencia’s cathedral. This gate was the main entrance through to Valencia’s palaces for the wealthy, and stood in place until the bridge and gate needed repairs in 1801 (as in seen the photos below) when the gate was totally replaced in limestone and widened for convenience. The Real Academia de Bellas Artes de San Carlos held a design competition, which chose the new design seen in the photos. They built three arches, and in the centre engraved Reinando Carlos IV y Maria Luisa de Borbón. Año 1801 (Reigning Charles IV and Maria Luisa of Bourbon. Year 1801), along with the shield of the city on top. In keeping with the epic stupidity that saw the walls around the city pulled down in 1868, this gate was also destroyed.

Roll over the photos/drawings for their dates 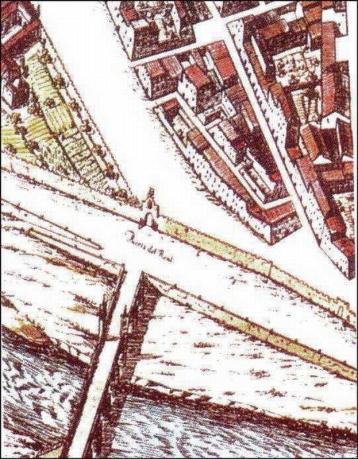 In 1945, the replica of the Puerta del Real was built, but named Puerta del Mar. The replica’s new physical location (in then Plaza del Marqués de Estella) is the site of the original Puerta del Mar, rather than the Puerta del Real. During this time, Spain was in isolation after their civil war and then ugly neutrality of the Second World War, so the reconstruction of the 1801 design became a postwar icon. The new addition to the gate is the cross in the centre, a symbol to those killed during the Spanish Civil War. One one side they engraved – Este monvmento encuentra en mvralla antigva pverta mar de la fundación y es reprodvcción exacta pverta llamar a la real que era sitvuada frente de pvente sv nombre y fve construidas en 1801 y demolido en el 1868 (This monument is located on the foundations of the Puerta del Mar and is a reproduction of the Puerta del Real, built in 1801 and demolished in 1868). One the other side was engraved –  Francisco Franco Bahamonde Hispanium moderating valentinus senatus ad memoriam perpetuam deo qui vitam ed homeland devoverint hoc monumentum erexitanno (The Valenciano senate erected this monument to Francisco Franco Bahamonde, alderman (regidor in Spanish, I think, like a council) of Spain to perpetuate the memory of which he offered his life for God and Country.) This ode of Franco is currently covered over, but remains on the gate, in line with the historical memory laws of getting rid of all things Franco. 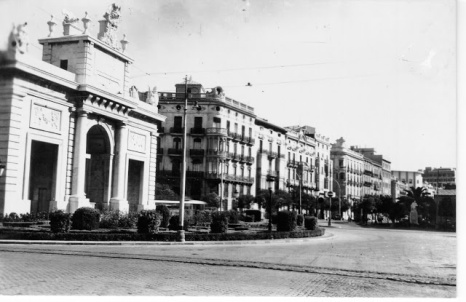 I don’t remember even taking these photos but they were tucked away in my archive. Three show the side where the Franco love is covered, the other shows the pretty Valencia shield garden side.

The original Puerta del Mar was a gate which pointed directly to the sea and was not on the riverbed itself like Puerta del Real. It led directly to the Convento de Santo Domingo, which is situated close to the new replica gate. During its time, the gate was connected to the convent, a citadel, a palace and weapons storage, and bore the shield of the city. The design and detail was similar to the Puerta del Real, and because the 20th century replica bears its name, the two gates can be easily confused. (In the first picture below, both gates can be seen, Puerta del Real at the bridge, and Puerta del Mar to the left) 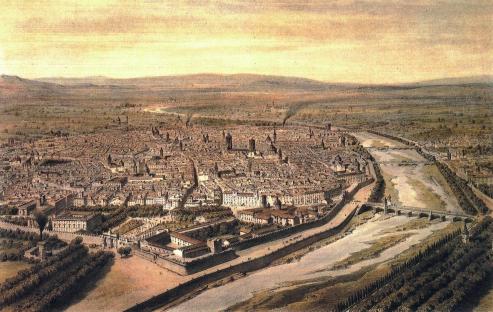 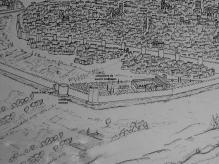 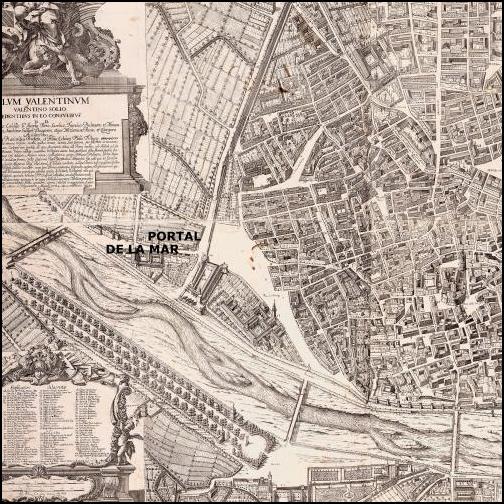 The Puerta del Mar, a replica of the Puerta del Real, but put in the original place of a whole different gate, taking its name, but not actually having anything to do with the gate whose name it took. Yes, that wasn’t confusing at all.