Embattled Falange leader Manuel Hedilla, arrested for defying Franco on April 25, has his death sentence commuted to life imprisonment in the Canary Islands. Since the death of Rivera eight months earlier, Hedilla has been in a battle with Agustín Aznar and Sancho Dávila for the role of leader of the Falange, the fascist ultra-right wing conservatives loyal to Franco’s cause. Hedilla has been more moderate throughout the war and does not believe in the Nationalists’ widespread use of horrific violence to take control of Spain. Franco had the Falange party merge with the Carlist groups in April, belittling Hedilla’s leadership, and he was arrested for speaking out. Franco’s brother-in-law suggested Hedilla be spared execution to keep Falange factions happy. Hedilla will only serve four years of his life sentence before being quietly let go, but will go on to write critically about Franco in the late 60’s and early 70’s.

The tiny town of Torrelavega, 27 kilometres from Santander in the north, sees heavy fighting resulting in the death of 12 Republican troops. Franco is preparing another huge siege in the north and tensions are mounting.

Private Catholic worship is again permitted by the Republican government. The Catholic Church, heavily involved in the war and supporting Franco, has suffered since the Second Spanish Republic began in 1931. Between 50-80% of priests in many areas have been murdered, along with nuns, monks and church laity, any suffering horrific deaths. Churches and cathedrals have been destroyed and relics have been burned. The Church has been especially cruel to the population for centuries and resistance has led them to take up against the government and support Franco and his fascists.

The Consejo de Aragón (Council of Aragon) is dissolved by Prime Minister Negrín. Led by Joaquín Ascaso since December from a capital in Caspe (100 kms east of Zaragoza, 200km west from Barcelona), the council ran the huge Aragon province and its attempts at social revolution and anarchist values. Now that Catalonia and its capital Barcelona are back in Republican hands instead of independent leaders, the government now wants all pro-Republican areas under their control. About 700 anarchists are arrested and the council agrees to disband the following day. Those arrested will only be imprisoned a few weeks as mostly communists troops take over the region on the government’s behalf. 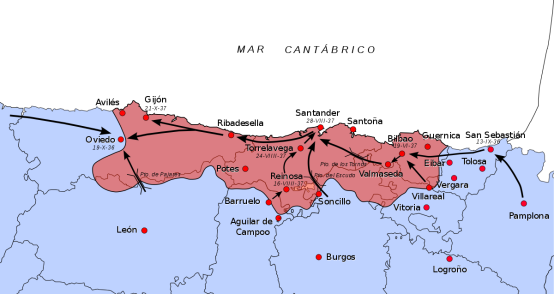 The Nationalist are ready to begin their massive new siege to take the north of Spain. The Army of the North of both sides have been assembled throughout the top half of Spain. General Fidel Dávila has 90,000 troops, 25,000 of them through three Italian divisions. They also have a massive cache of weapons, plus the German Condor Legion aircraft, plus Spanish and Italian planes. Their troops are fresh and the Nationalists are ready after the end of the battle of Brunete at the end of July. The Republicans have 80,000 in the region under General Mariano Gámir Ulíbarri. However, their planes are useless, and morale is low. The Basque soldiers included in the numbers are tired and devastated from a loss of their autonomous region and their capital Bilbao, and are already considering surrendering to Italian troops in order to survive.

The Nationalist 1st Navarrese Brigade attacks the frontlines between Valdecebollas in the Palencia region and Cuesta Labra in order to block Republican troops south of the Cantabrian mountains. This is in preparation to start capturing Republican territories in the mountain region over the coming week and capture the entire Cantabrian region and Santander city on the coast.