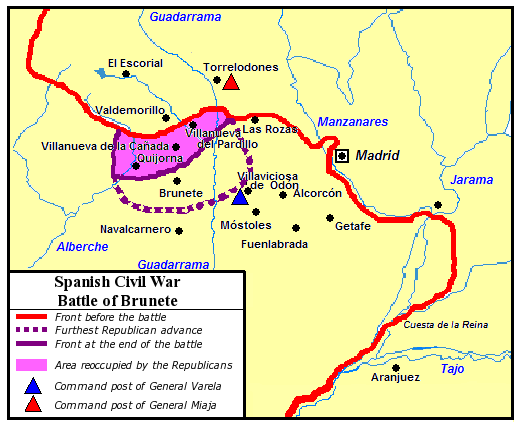 Under the cover of pre-dawn, the Republican men (between 70-85,000 total for the battle, 22,000 for the initial attack), commanded by General Miaja, sneak deep behind the Nationalist front lines, who lack troops on the ground. Rather than having men along the front lines, the Nationalists have men stationed at a series of towns north and east of Brunete (see map), their headquarters in Navalcarnero, 15kms south of Brunete. At dawn, the Republicans bombard all the towns around Brunete by air with 100 planes brought to the well-planned battle, and heavy artillery is used on the ground, catching the Nationalists off guard. General Líster and his newly reformed 11th division manage to advance 8kms through the front lines and circle around Brunete. By midday, the Republicans have the strategic town of Brunete. While the town does not have anything particular the Republicans want, it was proof they could dig into Nationalist territory and fight their enemy. This was to convince the Soviets to send more aid, and the French to open their borders to arms shipments.

The Nationalists, still commanded by General Varela, quickly pull together reinforcements around the area, and by midday as the Republicans claimed Brunete, the Nationalist 12th, 13th and 150th divisions are ready to fight back. The Nationalists have 45,000 troops in the immediate area to fight back. The Republicans quickly are met with resistance as they seek to storm south of Brunete, but are held in the town. The Republicans, flanked by the 34th and 46th divisions, attempt to break towards Quijorna, 6kms north-west of Brunete itself, but also cannot fight the sudden onslaught of Nationalists. The advance of the Republicans on the first day surprises even themselves, and the XVIII Army Corps, another 20,000 men (the 10th, 13th and 34th divisions) are not deployed, as they were not expected to be needed.

The east-located Republicans, who planned to fight from Carabanchel, the most southern suburb of Madrid, never break through the front lines, the Nationalists close into Madrid in full control of the area. The Republicans use heavy artillery bombing and still cannot break the Nationalists around Madrid.

Fires are starting to break out in the dry landscape outside Brunete due to firepower being used. Neither side make any advancements. The Republicans are keen to fight off each small resistance as they come, rather than moving around them and onto larger targets. This gives the Nationalists time to bring in fresh men. 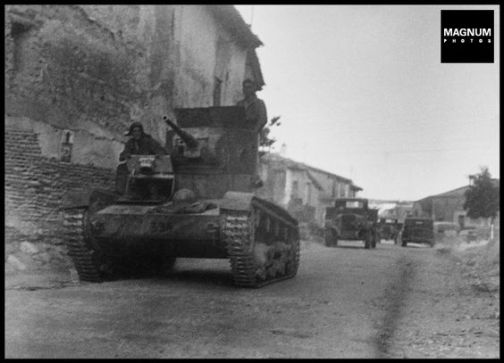 The Republican XVIII Army Corps of 20,000 men attack under darkness to cross the Guadarrama River and head east towards Boadilla and attack the Nationalists trying to hold the front lines outside Boadilla. Fighting continues after daybreak and the Republicans win, only to be repelled later in the day.

The Republicans in Madrid again attack the front lines at Carabanchel and fail. They will not attack here again as the circle around Madrid is a Nationalist priority and will not fail. The Nationalists also still hold the village of Quijorna west of Brunete. Franco sends 31 battalions, seven batteries of artillery and the entire Condor Legion (around 70 planes) from the Basque Country to help the Nationalists, finally giving the battered Basques a break.  The Republicans still have little more than their WWI artillery and guns with the troops. 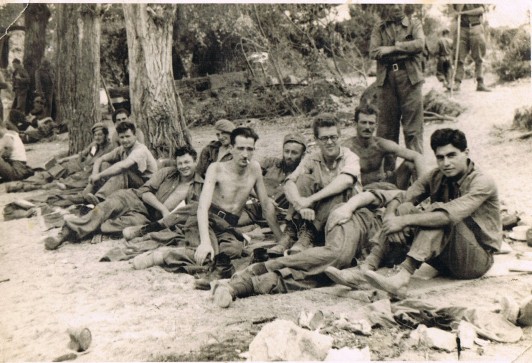 Two Republican brigades attack Quijorna, and take the village after suffering massive losses. Republican troops headed east towards Boadilla have suffered such great losses that they are now stranded, so close to the village itself. The Republican air support, while starting strong, are now outpaced by the German Condor Legion, who are taking control of the skies.

The Republican 60th division and XII International Brigades take Villanueva del Pardillo with tanks. Around 500 Nationalists are captured along with precious ammunition. Nearby Villafranca del Castillo is surrounded by Republicans by the 10th and 45th divisions.

Taken by Gerda Taro with Republican men outside Brunete

Colonel Jurado of the XVIII Army Corps plans a huge assault on Villafranca del Castillo, but falls ill and is replaced by co-leader Colonel Casado, who cancels the assault due to morale and fatigue. They are forced to engage by Republican leader General Miaja. The Nationalists are reinforced from a division arrived from Navarre and repel the assault. The Nationalists then try to take back Villanueva del Pardillo, but fail. Overhead these villages, huge air battles are being fought, up to 30 planes flying in formation against similar numbers in retaliation, with losses on both sides.

On the ground throughout the whole area, both sides are suffering horrific losses. American communist Oliver Law, commander of the Abraham Lincoln Brigade, is killed while fighting on Mosquito Hill, the ridge outside the town of Boadilla, among heavy Republican losses.

France decides to open its border with Spain (the point of the Brunete attack, to show Spain’s strength), and enormous amounts of weapons and equipment is shipped into Spain over several days, vital for the Republican cause to continue. France has violated the Non-Intervention clause, but this is retaliation for the Fascist Germans and Italians constant assistance the war on behalf of Nationalists.

The Republicans are suffering huge losses, not just from fighting. The extreme heat in the area plus lack of water has injured many men. Most Republican brigades, Spanish and International, have lost between 40 to 60 percent of their men in a week. The XIV International Brigades have lost 80 percent of the men. Total losses have not yet been tallied though between 15,000 and 20,000 Republicans are now dead, the Nationalists suffering similar.

British volunteer Major George Nathan dies while commanding the XV International Brigades when a bomb detonates at his post near Boadilla. Attacks on all fronts are now minor and General Miaja of the Republican Army wants to end the offensive. The Republicans have Brunete and have cut off the Extremadura Road. The Basque country is relieved by diverted Nationalist troops and planes. The Republicans look strong in the eyes of the French and Soviets again, and their main objectives have been achieved. However the Nationalists surrounding Madrid have not yet been totally cut off from the Army of the South.

The Republicans are ill, battered, without serious supplies and suffering from their massive losses. They dig in all areas in the Brunete front and prepare for the Nationalist counterattack they know is coming. Some 38,000 Nationalists are coming.

The war is one year old today. Spain is fractured and blood had spilled in every city and village. No one is safe. No end is in sight. No saviour is coming.

Republicans dig in outside Brunete