From the author of the international best-selling Tudor Trilogy, the true story of the Tudor dynasty continues with the daughter of King Henry VII, sister to King Henry VIII. Mary Tudor watches her elder brother become King of England and wonders what the future holds for her.

Born into great privilege, Mary has beauty and intelligence beyond her years and is the most marriageable princess in Europe. Henry plans to use her marriage to build a powerful alliance against his enemies. Will she dare risk his anger by marrying for love?

Meticulously researched and based on actual events, this ‘sequel’ follows Mary’s story from book three of the Tudor Trilogy and is set during the reign of King Henry VIII.

I have read Owen, Jasper and Henry, and also Warwick, by this author, so having a woman as a title character is an exciting addition! But it is not about Mary I, but Princess Mary Tudor, Henry VIII’s sister. That’s when I really jumped for the book, as I love both Mary and Margaret, forever eclipsed by their king brother.

The book starts in 1509, and Princess Mary is but 13 years old. Her brother Henry is only five years older but has just been crowned King of England. Henry knows who he shall marry – Katherine of Aragon, widow of Arthur, and now Mary is going to be an equally powerful princess – powerful in that selling her to the highest bidder will help increase Henry’s power.

Mary has, in the past, been written as a fool, a simple girl interested in princes and gowns, no head for politics. What a silly notion, because Mary is the daughter of Henry VII and Elizabeth of York, her sister is Queen of Scots, Arthur was to be king, before Henry took poor Arthur’s place. How could Mary possibly be dim? Here, Mary is educated, confident and a brave young woman at the heart of a very serious political match for her country. Yes, she may break down in private, but her public face is one of total poise, the way only a royal upbringing could provide.

Mary considers Katherine of Aragon a sister when she marries Henry (Mary was very young when Katherine married Arthur). Henry and Mary are close, even though Henry is never an easy man to love, and is often heartless to Katherine. Mary has lost both her parents, and Henry breaks her betrothal to the  Holy Roman Emperor Charles, also just a child, and instead gives Mary in marriage to King Louis of France.

Mary may be a queen, but is also Europe’s most beautiful princess of 18 years when she marries the frail 52-year-old Louis. Mary does as she is bid (and has a child Anne Boleyn in her household, just a little side bonus) and marries the old Frenchman. But first Mary told her brother – I shall marry Louis if  can choose my second husband.

That is where Mary is so grand. Louis kicks the bucket three months in, and kings and dukes are clamouring for Mary less than a week into widowhood. But Mary has her suitor all ready, Charles Brandon, Henry’s best friend and (while the Duke of Suffolk) not at all good enough for her. Secretly married, Mary defies her brother and King, and is banished from court and from his kindness.

Never mind all these details; Mary is written as a woman, a wife, a mother, a sister. She becomes a queen of France (who killed her old husband with too much sex, so they gossiped, eww), then a woman who married for love, then a wife who had to endure infidelity, the births and deaths of children, the heartache she felt for Queen Katherine and the fortunes of all around her. Mary also suffered with her health for her whole life.

Mary was an important princess in the royal history of the time, and is not prone to being frivolous, and so is written as an educated woman. While the Tudor world is filled with politics, law, religion, it is also filled with love, friendship, parties and jousts, colour and excitement, and the book weaves all together.

Did Brandon love Mary back? The book gives hints about such as Mary’s life is followed. Mary’s death is beautiful and tragic, and the process starts over, as Brandon marries a child as a firm alliance just a few months later (he was a lucky man to capture both Princess Mary and Catherine Willoughby!). Mary’s granddaughter Jane would become queen for nine days many years later, and must have had the blood of THIS type of Princess Mary in Jane’s veins.

Thank you, Tony, for a wonderful novel!

About the Author Tony Riches is a full-time author of best-selling historical fiction. He lives in Pembrokeshire, West Wales and is a specialist in the fifteenth century, with a particular interest in the Wars of the Roses and the lives of the early Tudors. For more information about Tony’s other books please visit his website tonyriches.com and his popular blog, The Writing Desk and find him on Goodreads as well as Facebook and Twitter @tonyriches 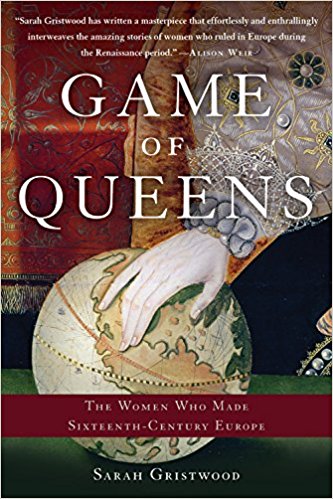 Sixteenth-century Europe saw an explosion of female rule. From Isabella of Castile, and her granddaughter Mary Tudor, to Catherine de Medici, Anne Boleyn, and Elizabeth Tudor, these women wielded enormous power over their territories, shaping the course of European history for over a century. Across boundaries and generations, these royal women were mothers and daughters, mentors and protégées, allies and enemies. For the first time, Europe saw a sisterhood of queens who would not be equaled until modern times.

A fascinating group biography and a thrilling political epic, Game of Queens explores the lives of some of the most beloved (and reviled) queens in history.

cover and blurb via amazon

Sarah Gristwood has written a superb book detailing the lives of incredible queens from England, Spain. France, The Netherlands and Hungary, starting with Isabella of Spain through to Elizabeth I. Without sounding like I am hero-worshipping, this biography is perfection.

Isabella of Spain was unlike any queen before her. She had inherited Castile in her own right, married the king of Aragon and became the warrior leader needed to invade southern Spain and conquer it for the Christians. The example as a female leader set a standard for her daughters, including Katherine, who would go on to be queen of England.

The beauty continues as the book does not solely tell the tales of English queens (though Queen Katherine crushing of the Scots is brilliant, as is Margret Tudor on the Scots side with all her turmoil), other countries and their female leaders are given much page-time. Marguerite of Navarre is detailed, describing the intriguing relationship with her brother Francis I and her own mother, Louise of Savoy. Her diplomatic skills are recognised, along with her role in the Protestant Reformation. Marguerite also tutored Anne Boleyn, noting how Anne’s birth was her downfall, as she knew when to push forward but not when to hold back, not born into a royal role.

Mary of Hungary is a great addition to the book. With her strong noble family, she was a queen in Hungary as well as governor of the Netherlands in her own right. Mary of Guise is displayed as astute in Scotland, and Catherine de Medici’s long life ruling over France is beautifully written. A bastard daughter risen to be a wife of a second son instead became the French queen and was able to steer own family in ruling the nation.

Queenship is regularly overshadowed by kingly pursuits, when history can lavish us with wise, educated women. Religion plays out over every tale, where it could help steer these queens, guide or justify their behaviour and aid them in keeping their kingdoms alive. While the fate of women was always in the hands of male family members, these women took the hand they were dealt and ruled, an example to everyone.

Gristwood’s book is flawless and I would recommend it to absolutely everyone.