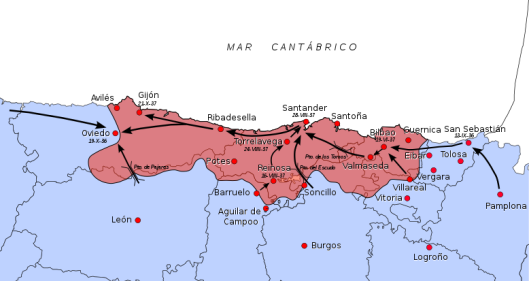 The Republican attack on Huesca begins in the hope of stalling the Nationalist attack on Bilbao. The XII International Brigade, now without their General, join Spanish Republicans under their General and storm Huesca, 300 kilometres southeast of Bilbao, and just 70 kilometres north of Zaragoza. Huesca has been held by the Nationalists through the war and while they lack the men the Republicans have, they are well dug into the area. The Republicans have 50,000 men, mostly anarchists and POUM members from Barcelona, sent after the May Days a month earlier. Thousands of Republicans men are cut down with machine guns and artillery fire in what will become a week-long offensive. 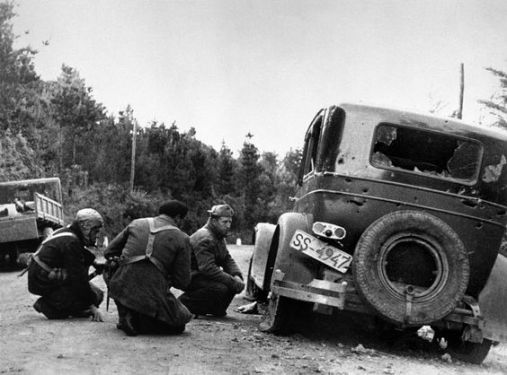 Republican/Basque fighters outside the Bilbao (via Robert Capa)

The battle of Bilbao sees fighting in the streets of the city, with Nationalist supporters rising up against their fellow Basques. The Republican/Basque army is in retreat, headed for Santander, and Nationalist sympathisers, Fifth Columnists, riot through the city and take strategic buildings. Anarchist militias, not fleeing with the army, fight back against the columnists and beat them back, with mass casualties on both sides. The Basque police force, still in the city, have to hold back the anarchist fighters as they try to storm jails to kill Nationalist prisoners.

Most of the city is now evacuated as the people of Bilbao flee ahead of the awaiting Nationalist army, who are already camped inside the Iron Ring. The government and army have completed much of their retreat and it is every man for himself as the Basque capital is about to fall.

The POUM (Workers’ Party of Marxist Unification) party is officially outlawed in Spain. Their leaders are rounded up mostly in Barcelona. Their official leader, Andreu Nin, is not yet found and caught.

Republican troops continue their offensive against Huesca, to draw Nationalist troops away from Bilbao. Republicans attack the villages of nearby Alerre and Chimillas, but are beaten back by the Nationalists. Around 9,000 Republican men are now dead and the offensive to take Huesca is all but over.

Andreu Nin is found in Barcelona and arrested. He, along the other POUM leaders are secretly taken by Communists to an illegal torture prison at Alcalá de Henares, just north of Madrid. Alexander Mikhailovich Orlov, a General for the KNVD (Soviet internal affairs), tortures Nin for days. It was admitted by Spain’s Education Minister, a Communist, that Nin was interrogated and would not talk. They then used torture in the form of peeling off Nin’s skin and tearing his muscles and they tried to get information out of him. Within days, Nin’s face was unrecognisable. Whatever the Communists wanted, none of the POUM either had it, or would give in.

Minster of Health Federica Monstseny, and others soon start asking the Spanish government if they know the whereabouts of Andreu Nin and his party members. A campaign named Gobierno Negrín: ¿dónde está Nin? (To the government of Negrín: where is Nin?) begins as rumours spread Nin was taken to the Soviet Union for execution, or that he was killed when the Germans tried to save him (thus making him a secret fascist). Rumours swirl Nin was either with Franco in Salamanca or with Hitler in Berlin. Nin is never seen in public again.

Bilbao is bombed with 20,000 shells as the capital city is destroyed. Basque President Aquirre makes a secret deal to send 900 Nationalist prisoners from jails and hand them to the enemy, in the hopes of saving some innocents who are being bombed.

Jaime I, a dreadnought battleship of the Spanish Navy, is destroyed in Cartagena. Bombed three times in drydock on May 21, it is beginning another round of repairs when an explosion happens without warning. Sabotage versus accident is never fully explained. All three of Spain’s dreadnought sister-ships are now destroyed.

Shells knock out bridges into Bilbao

The Nationalists walk straight into Bilbao

Juan Manuel Epalza, working for the Basque government, leads 900 Nationalist prisoners out of prison in the night and hands them over the awaiting Nationalist army outside Bilbao. At dawn, the Nationalist troops walk into Bilbao without opposition. About 200,00 people have now fled, and the Nationalists start giving food to some left behind in the city. The Bay of Biscay is filled with boats as Basques try to flee the Nationalists. Many refugee boats are overcrowded and sinking, and the Nationalist Navy have ships waiting to round them up and send them home. Many boats attempt to float to France, and Non-Intervention Committee ships, mostly from Britain, watch them but do not go to their aid. Many sink are or are sent back to Spain.

Franco now has the multiple steel and mine factories in Bilbao in his hands. But he has to give two-thirds of all production to Hitler. With Hitler is making his own preparations for war, Franco owes Hitler for all the German planes, weapons and killing that has been done on Franco’s behalf.

Rumours continue about the possible death of Andreu Nin, who may or may not still be alive in Alcalá de Henares. Many do not know officially of his secret arrest yet, but are well aware the Communists have pounced.