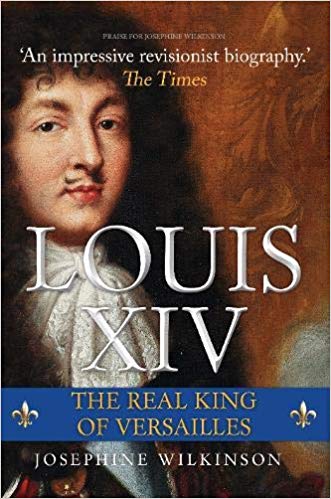 Louis XIV’s story has all the ingredients of a Dumas classic: legendary beginnings, beguiling women, court intrigue, a mysterious prisoner in an iron mask, lavish court entertainments, the scandal of a mistress who was immersed in the dark arts, and a central character who is handsome and romantic, but with a frighteningly dark side to his character.

Louis believed himself to be semidivine. His self-identification as the Sun King, which was reflected in iconography of the sun god, Apollo, influenced every aspect of Louis’s life: his political philosophy, his wars, and his relationships with courtiers and subjects.

As a military strategist, Louis’s capacity was debatable, but he was an astute politician who led his country to the heights of sophistication and power – and then had the misfortune to live long enough to see it all crumble away. As the sun began to set upon this most glorious of reigns, it brought a gathering darkness filled with the anguish of dead heirs, threatened borders, and a populace that was dangerously dependent upon – but greatly distanced from – its king.

Cover and blurb via Amberley

I will be honest; when I received a copy of this book, I was taking on a subject in which I knew zero… literally nothing. My French court history extends of Catherine Medici and…. that’s it. Versailles is gorgeous, and there’s recently been a tv series by that name (didn’t watch, never a good place to start accuracy wise) and Louis was the king who put the man in the iron mask… right?  But Josephine Wilkinson has proven to me multiple times she produces quality books, so I dived in to learn about the French.

Little Louis was born in 1638, a miracle gift from God, as his parents had suffered so many stillbirths before they got their heir, and the little dauphin took the crown at age four, ruled by a council instead of Queen Anne. It was great to learn about a royal heir who had a good relationship with his mother, how they were close and affectionate, instead of being raised by strangers. Louis also grew up with governesses and a tutor which formed a close group around the boy, giving him friendship a budding king would be grateful to have. With his mother at his side, Louis was king as she negotiated the end of the Thirty Years’ War and fostered a fixation that ruling was a divine absolute right of Louis’.

By 13, Louis was old enough to rule himself and took on financial changes in the court. While he was in love with a girl, he was supposed to marry his cousin Mary Theresa, which he did in 1660, age 22. His cousin was the daughter to King Felipe of Spain, who was freshly dead, and Louis never got a dowry paid to him, giving Louis an excuse  to invade the Spanish Netherlands. This was a love Louis continued with – war. Over the years, Loius invaded and battled in all directions for his country, always believing he was doing the right thing. The French court about Louis was a vivid mixture of friends, ministers and lovers, all brought together by Dr. Wilkinson.

The book suggests Louis took his role as a king very seriously; he considered him an absolute ruler and France was in his hands. Over his 72 years as king, Louis managed his huge country, and an almost impossible amount of foreign policy and the origins of French colonies around the world. Louis was an absolute monarch, ruling France with total power, while extending France’s influence in every direction.

Everyone knows of the beauty of Versailles, the sun, and all of France would orbit around their Sun King. I had details coming at me in all directions while reading this book, a whole new area for me to explore. Married for 23 years to Maria Theresa, they had six children, only one making it to adulthood. However, Louis had countless mistresses and well over a dozen illegitimate children, though a few handfuls of them were legitimised as they grew. Louis took a second wife, Françoise d’Aubigné, and either he got too old, or he really cared for this woman far inferior to him, as he managed to curb the mistress habit.

I cannot say if this is a good biography for an expert on the subject, but as a beginner, I feel like this book is a great place to begin. There are so many people in this great cast of characters over the 72 years of Louis’ reign and total transformation of France. Direct descendants are still walking around today, spread into major European families, cementing Louis’ place in history.