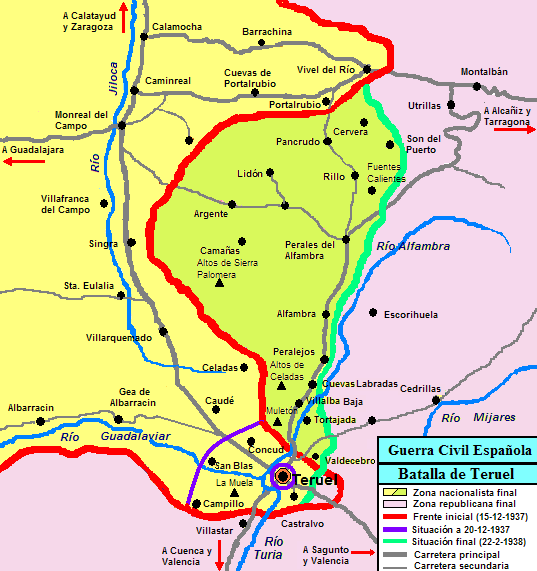 In the last calvary charge of modern warfare, the Nationalists attack Teruel from the north, while Republican forces are centred in the south of the town.  The Nationalists launch an attack along the Alfambra river north of Teruel, a front-line thirty kilometres long with 100,000 men and 500 guns. This massive charge in an undefended area means the Nationalists make it through the front-lines and into Teruel itself. The Republicans who can, run for their lives, scattered out in every direction to hide or be slaughtered. Generals Yague and Aranada consider this their moment of victory in the Teruel battle.

the leftovers of Teruel town itself

Many Republcians are still in hiding in the Teruel area, and Aranda and Yague have to ensure the town is cut off completely from any further reinforcements reaching the surrounding areas. Anyone left alive not on the Nationalist side must be pulled out of their hiding places and killed. Since the Alfambra charge, the Republicans have lost more than 22,000 men, including 7,000 prisoners, and the Nationalists have claimed an area of 1300 square kilometres around Teruel.

Republicans defenders in Teruel before their capture

The road from Teruel east to Valencia is destroyed, cutting the area off from the relatively safe Republican city. No one can reach Teruel or surrounding villages and areas, as all mountains and roads are Nationalist front-lines. General Saravia for the Republicans orders a total retreat of all Republicans and International Brigades from this lower Aragon area. Some 14,500 men are still trapped in the new Nationalist zone and have no chance to be rescued or have reinforcements fight their way in to help them in battle.

Well known Communist leader El Campesino (Valentín González González), manages to break through Nationalist lines and escape, where he claims he was left by other Communist leaders to die. The Nationalists now have all of the Teruel region to themselves, and declare victory. Their prize is around 10,000 Republican bodies strewn through the town itself. It is estimated that around 85,000 Republicans have been killed, and around 57,000 Nationalists are dead.

The Nationalists, though battered, can quickly resupply men in the area, thanks to taking the massive factories in the Basque country the year before. But the Republicans have lost the bulk of their men and all of their airforce has been destroyed and cannot be replaced. Not only that but Republican morale has fallen desperately, and now they have no towns or areas in which they occupy to keep Valencia or Barcelona safe from the ever-increasing Nationalists. Franco is ready to begin the new Aragon offensive, to push through to the eastern coast and crush these two cities.

Any remaining Republicans, Communists and International Brigades left alive in Aragon huddle to form a front line along the bank of the Alfambra river, about 40 kilometres north of the Teruel town itself. As the Nationalists prepare for the upcoming Aragon offensive, these men have no plans or artillery to aid them.