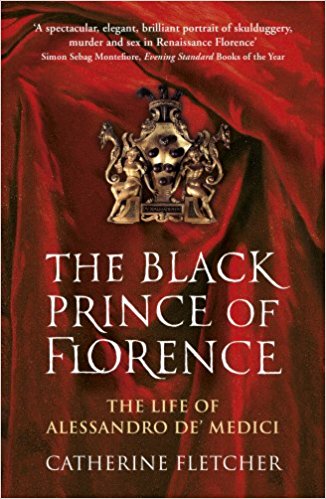 Ruler of Florence for seven bloody years, 1531 to 1537, Alessandro de’ Medici was arguably the first person of color to serve as a head of state in the Western world. Born out of wedlock to a dark-skinned maid and Lorenzo de’ Medici, he was the last legitimate heir to the line of Lorenzo the Magnificent. When Alessandro’s noble father died of syphilis, the family looked to him. Groomed for power, he carved a path through the backstabbing world of Italian politics in a time when cardinals, popes, and princes vied for wealth and advantage. By the age of nineteen, he was prince of Florence, inheritor of the legacy of the grandest dynasty of the Italian Renaissance.

Alessandro faced down family rivalry and enormous resistance from Florence’s oligarchs, who called him a womanizer-which he undoubtedly was–and a tyrant. Yet this real-life counterpart to Machiavelli’s Prince kept his grip on power until he was assassinated at the age of 26 during a late-night tryst arranged by his scheming cousins. After his death, his brief but colorful reign was criticized by those who had murdered him in a failed attempt to restore the Florentine republic. For the first time, the true story is told in The Black Prince of Florence.

Catherine Fletcher tells the riveting tale of Alessandro’s unexpected rise and spectacular fall, unraveling centuries-old mysteries, exposing forgeries, and bringing to life the epic personalities of the Medicis, Borgias, and others as they waged sordid campaigns to rise to the top. Drawing on new research and first-hand sources, this biography of a most intriguing Renaissance figure combines archival scholarship with discussions of race and class that are still relevant today.

cover and blurb via amazon

I do so love the Medicis, especially this guy. No, he was a hideous human being, but everyone needs a bad guy. This guy was so awful he got a spot in my last book, and will get a spot in each of my Cromwell books.

Florence was far from a nice place to visit in the 1500’s. The weather might have been nice, but it would be easy to be killed for your alliances. Poison was a popular weapon and so were swords, and that leads us to Alessandro de’ Medici, the first Duke of Florence.

Alessandro’s birth in summer 1510 is a mystery in itself. His mother was Simetta da Collevecchio, a Moorish servant from Africa. She worked in the Medici household, and while officially Alessandro’s father was recorded as Lorenzo de’ Medici, it is said his father was, in fact, Lorenzo’s great-uncle, Cardinal Giulio de’ Medici. He is also well-known as Pope Clement VII. Alessandro was raised as Lorenzo’s bastard, alongside Lorenzo’s other bastard, the great Catherine de’ Medici.

Alessandro and Catherine were bounced around after Lorenzo died after Catherine’s birth, and Pope Leo, a gay Medici pope, had the children cared for. The Holy Roman Emperor gave little Alessandro a duchy in Penne in 1522, and in 1523, Alessandro’s real father was made Pope.

Ippolito de’ Medici, Pope Clement’s cousin (though they were raised side by side by the former Pope Leo) ran Florence, though he was looking to be made cardinal. But the Medicis were overthrown in 1527, when Rome was being sacked by the Emperor’s soldiers, locals in Florence tore up the city and destroyed the Medicis. By the time the Medicis took Florence back in 1530, they had a new man to rule – 19-year-old Alessandro de’ Medici.

If Alessandro thought he was safe after being made the first hereditary duke of Florence, a title that his father Pope Clement bought for him from the Emperor Charles, he was mistaken. This was Florence, and the pace would never let up. Alessandro needed a bride, and the Emperor had a bastard daughter; his bastard ‘sister’ Catherine was being prepped to be queen of France.

Alessandro was nicknamed Il Moro, due to his dark skin, the first dark-skinned noble in Europe. Alessandro was rich and entitled, he was known as a tyrant, depraved, lewd and disgusting. Of all the evils in Alessandro’s life, inside and out of the fort he built inside Florence’s walls, he had one enemy – Lorenzino de’ Medici. A distant cousin, in 1537 he lured Lorenzo out of normally safe locations in order to have sex with Lorenzino’s sister. Only there was tyrannicide committed – Alessandro was dead by his cousin’s sword. Lorenzino wrote a story about the murder, to get the Medici enemies to rise up. Only they didn’t and Lorenzino had to flee. Alessandro was hurried to San Lorenzo cemetery and secretly buried to keep the situation was quiet as possible.

The truth is tough to find with Alessandro’s life and death and this book does not have new information, but it’s a good read nonetheless if you are new to the tale. As the author states – Alessandro had to pay for his father’s sins, not only his own. Everyone seemed to know his true father was the Pope. Those who wanted the papacy and its power hated Alssandro; other Medicis hated Alessandro for rising so high; his people were not a faithful lot.

Not all I know about Alessandro is in the book; not everything in here I agree with, but I mean no disrespect to the author in this. The details are hard to come by. Alessandro’s lavish life is well documented, but the full knowledge of that time will be known to the Medicis alone. He is one Medici definitely worth reading about.