The Soviet planes are giving the Republicans power in the area and the German Condor Legion planes have to retreat. The Nationalists still have to cut off the Madrid-Valencia road. International Brigades try to hold these last few key locations to save the road and keep it open. The volunteers are hacked into pieces by the Nationalists over a fateful day in civil war history.

Thanks, Richard, for the always great maps

After a week of fighting, the Nationalists have fresh troops in reserve and bring them into the valley to attack the town of Morata. At dawn, XV International Brigade British volunteers are sent to the Morata-San Martin de la Vega road and head towards the Jarama river. They have Spanish men to one side and the 18th battalion, the Balkan Dimitrov battalion, to the other, protecting them. They attempt to take a ridge and were unaware the Nationalists have already crossed the river, so once they reach the top of the hill, they have to scatter and take positions, with the machine-gun company ready, with one company either side, and one in reserve. Three hours of fighting commences with the Nationalist Moorish soldiers, men well-trained, compared to freshly arrived volunteers. The machine guns have the wrong ammunition, and men armed with rifles have Nationalists swarming towards them. All four companies need to engage in fighting to hold back the Nationalist onslaught, but men are quickly cut down. The British have a French/Belgian battalion just to their north in the hills, but they retreat, leaving the British and Balkans exposed. As the day continues, the volunteers are forced to retreat further and further, as the death count rises. They need to retreat back down the hillside onto the plateau, but the Nationalists get over the top of the ridge and not many men make down the hillside alive.

Finally the Republican machine-gun company gets the right ammunition and they are able to start firing back at the invading Moorish men. They have taken the Pingarrón hill, now nicknamed Suicide Hill, but with machine-guns in place, the Nationalists must hide in the darkness and retreat back over hillside in the night. But the damage has been done; a day of fighting has killed half the Brigade , the British losing 375 men out of 600. Both Pingarrón Hill, ‘Suicide Hill’ and the Morata-San Martin road are still in Republican hands, but only nightfall has saved them. The Balkan, German and even fleeing French/Belgians have also suffered heavy losses. The survivors have around fifty desperately wounded man to care for, but most lose the battle. Survivors are threatened in order to get them back to the front lines before daybreak. 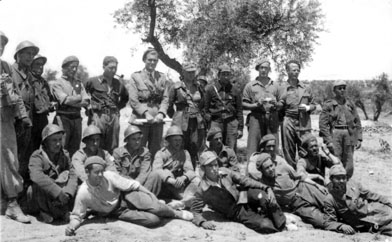 some of the British battalion at Jarama

Fighting begins early in the morning. The German Thaelmann and Balkan Dimitrov battalions engage in early battle, and the British are ordered to engage and help them, with the help of the Spanish Lister brigade, also suffering heavy from losses. The Nationalists have set up strategic machine gun positions, and the Republican tanks do not appear, and only three planes arrive to help, only flying over once to drop bombs. The British battalion are forced into having to run 600 metres straight at the Nationalist machine guns and ignore their orders, knowing death would be the only outcome.

The British send 40 men to recapture their machine gun positions, but all but six are killed. By now their commanders are captured, injured or defeated, with the battalion now very short of men.

A fresh brigade of Nationalists arrive with tanks, and the volunteers, with a new  commander have no choice but to retreat from the road by early afternoon. The British, German, French/Belgians, Irish and the Balkans are all attacked in every direction, men slaughtered as they try to escape. The road is lost to the Nationalists and the Republican machine guns are destroyed by tanks. Men lie dead and left behind, many wounded and all tired, starving and broken.

Overnight, the Nationalists pull back and the Republicans gain fresh companies of Spanish men. The Republican line is now protected and will not change in position for the rest of the war, which a stalemate developing, much like in the battle for Corunna Road a month before. But killing continues with snipers and machine guns constantly battling for position, which will never advance. The battle of Jarama is now ten days old and 20,000 men are now dead, around 13,000 are Republicans. Everyone who came to Spain to fight fascism has taken a heavy blow.

The new American Lincoln Battalion arrives at Jarama, a total of 550 men. They include a battalion of Irish men who have left the British company to join the Americans. They have trouble with finding a good leader and most have little or no training at all, but they get to spend their first five days as reserves before their own battle commences.

The Republicans have been commenced by two Generals, Miaja and Pozas, which causes problems in communication, and Miaja takes over alone. The Spanish Lister battalion attacks Pingarrón once again, in which half of the men killed over two days. They retreat and the Nationalists are amazed such a stupid attack was ordered towards them. The battle still has another ten bloody days to go.