The beautiful Basque city of Irún, in Spain’s north, is destroyed in battle. The city is in a pivotal location on the coast, and on the borders of both France and the Spanish region of Navarre. As Navarre is a stronghold for the Carlists on the Nationalist side, the 3,000 Republican fighters need to hold Irún in order to gain supplies from France. Nationalist destroyers and battleships have been bombarding the town for almost a month, and also have planes, tanks and 2,000 well-trained soldiers. German and Italian planes bomb the town, and drop pamphlets, warning the population of mass executions like in the town of Badajoz. Most of the battle takes place on the south side of the city near the Convento de San Marcial, where Republicans fighters, made up of Basque nationalists, miners of Asturias (who are akin to fighting), and communists volunteering from France, are alongside the locals. However they lack training and weapons, with only some guns, dynamite, and eventually reduced to throwing rocks.

Fighting goes on throughout the day, and the Republicans shoot vicious Nationalist Colonel Alfonso Beorlegui Canet in the leg, on the international bridge of Irún (he will die a month later of gangrene). But the Republicans are forced to retreat and abandon their city. Anarchist militia set fire to many key locations in the city as they flee, so they cannot be used by the Nationalists. (This decision would lead to many propaganda scenarios throughout the war, as Nationalists would then destroy a town and say ‘the rojos did it, just like in Irún, despite the fact it was untrue) Many of the population flee either to the safety of France if they can, or retreat further into the Basque country. Nationalist forces can now continue on towards the critical port city of San Sebastian, just 20 kilometres away. The Basque country is already cut off from a rest of Republican Spain and is set to become a guinea pig for German bombers practicing for WWII. 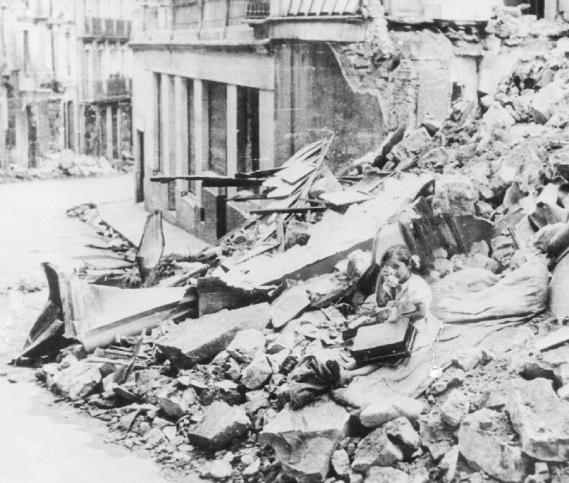 The battle of Cerro Muriano commences in the province of Cordoba, in Spain’s south. Following the battle in the city of Cordoba in August, outlying areas are now ready to be taken by the Nationalists, with Cerro Muriano just 20 kilometres north of the city. The Columna Miaja, which have up to 3,000 Republican fighters in the region, engage in a 36-hour siege between them and violent Regulares soldiers from Morocco and many Spanish Legion troops. The battle leaves a huge number of men dead in the town. The Republican side is completely eliminated while the Nationalist take the town with few deaths.

The battle of Cerro Muriano includes the moment captured of the iconic ‘Falling Soldier’ photograph by Robert Capa, and will be covered in a ‘This Week in Spanish Civil War History Extra’ post.

Italian aircraft arrive on the island of Mallorca to set up new bases, so they can begin serious bombing campaigns on the mainland, especially targeting Barcelona.

Portuguese sailors on two navy vessels mutiny against their officers, so they can seize the ships and go to Spain, to help the Republicans. But the mutiny is crushed by men who are loyal to Portuguese dictator António de Oliveira Salazar. The mutiny only strengthens repression against communism and left-wing ideals in Portugal.

The first Non-Intervention Committee meeting is held in London. The meeting has 23 countries represented, with only Mexico supporting the Republicans. But because the borders are closed and ships patrol the coast, Mexico cannot give the Republican government support or supplies. Larger South American nations such as Chile, Peru, Brazil and Argentina support the Nationalists, and Germany and Italy are part of the committee, yet their dictators continue to aid the Nationalists. Britain and France are sitting on their hands like naughty children, the US is trying to keep clear, but Russia want to help communist interests within the Republic. 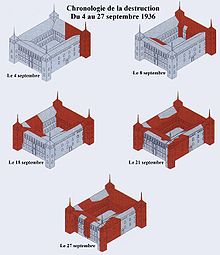 Destruction of the Alcázar over September

The battle of the Alcázar in Toledo has been running since July 21, with 1,000 Nationalists  trapped inside (and two-thirds of them too young/old/female to fight), while the Republicans are unable to breach the castle walls. Republican Major Vicente Rojo Lluch, one of the most prodigious military left-wing men in the war, walks blindfolded with a white flag to the Alcázar to negotiate surrender with Nationalist garrison leader, José Moscardó Ituarte, 1st Count of the Alcázar of Toledo. The Alcázar is now badly damaged but not yet fully breached, with two of its corner towers still standing. Moscardó has already sacrificed his teenage son to the Republicans in July (who held him hostage and let him call his father while being threatened with death. His father told him to die like a patriot and the son was killed one month later) and refuses to surrender the Alcázar to the Republicans. However, Major Rojo does allow for a priest (hard to find since Toledo’s have already been murdered or have fled) to go into the Alcázar and baptise two babies born inside during the siege.

The destruction of one of Spain’s most amazing sights

A priest with left-wing views (and thus, not yet murdered) arrives from Madrid. Vázquez Camarassa goes inside to do the baptisms and give absolution to those in the Alcázar. That night, Major Rojo and Colonel Moscardó meet again, to negotiate the release of the 500 women and children. The women refuse to leave, opting to take up arms and die rather than surrender to the Republicans. Overnight, grenades are thrown at the Alcázar, cutting off all communication with Colonel Moscardó, which would make a surrender negotiation with the Chilean ambassador the next morning impossible.

Nationalist women and children participate in the siege

This is not a detailed analysis, just a highlight (lowlight?) of the week’s events. Feel free to suggest an addition/clarification/correction below. All photos are linked to source for credit