The Battle of Badajoz continues, a day after being taken by the Nationalists. The dawn of the day sees thousands murdered in mass executions all over the town.

See The Battle of Badajoz.

The battle of Mallorca starts. The island is under the control of the Nationalists but Republican forces storm the island from the sea and manage to get 12 kms inland with 8000 militia men. The battle will rage for another month as the Nationalists gain Italian back-up.

Troops on the shore after beginning the battle

The mayor of Granada, Manuel Fernández Montesinos, is assassinated, a week after taking office. The major city has been without a mayor for months, as the post of considered a death sentence. On the day of his assassinated, his brother-in-law, the famous writer Federico García Lorca, is arrested by Nationalist forces.

The legendary Federico García Lorca, along with three others, Joaquín Arcollas Cabezas, Francisco Galadí Melgar and Dióscoro Galindo González, are taken out of Granada, to Fuente Grande, between the nearby towns nearby Víznar and Alfacar, and executed.   The men were forced to dig their own graves before being shot. Lorca, a man who had friends on both sides of the battle, was reportedly killed for being gay, though all the details have never been fully explained. The bodies have never been found.

NB – there will be a ‘This Week in Spanish Civil War History Extra’ on Lorca on August 19.

In line with the Non-Intervention Agreement, (which is being ignored by most countries who have signed) Great Britain bans all arms and aircraft sales to Spain. As the Nationalists are being armed by Germany and Italy, this harms only the Republicans, who have to go to Russia for help.

For several weeks, Republican miltia have been attempting to take back the strategic southern city of Cordoba. On August 20, 3000 troops attack the Cordoba gate 5 kms from central Cordoba, but are beaten in a three-day offensive. This sets off another month of reprisal killings in the area which stabilises the region (as most non-Nationalists are now dead).
. 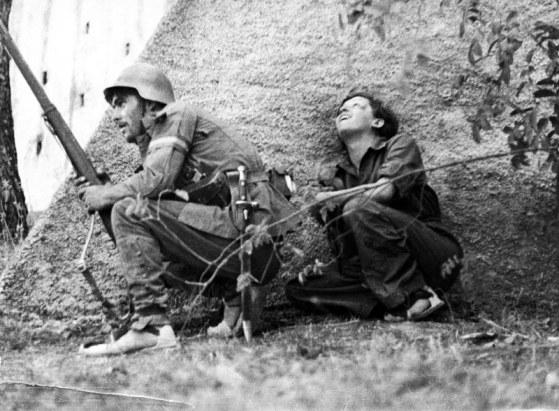 Gerda Taro with a Republican soldier outside Cordoba

This is not a detailed analysis, just a highlight (lowlight?) of the week’s events. Feel free to suggest an addition/clarification/correction below. All photos are linked to source for credit.