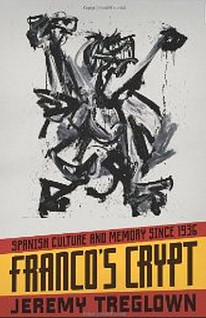 An open-minded and clear-eyed reexamination of the cultural artifacts of Franco’s Spain –True, false, or both

Spain’s 1939–75 dictator, Francisco Franco, was a pioneer of water conservation and sustainable energy. Pedro Almodóvar is only the most recent in a line of great antiestablishment film directors who have worked continuously in Spain since the 1930s. As early as 1943, former Republicans and Nationalists were collaborating in Spain to promote the visual arts, irrespective of the artists’ political views.

Censorship can benefit literature. Memory is not the same thing as history.

Inside Spain as well as outside, many believe—wrongly—that under Franco’s dictatorship, nothing truthful or imaginatively worthwhile could be said or written or shown. In his groundbreaking new book, Franco’s Crypt: Spanish Culture and Memory Since 1936, Jeremy Treglown argues that oversimplifications like these of a complicated, ambiguous actuality have contributed to a separate falsehood: that there was and continues to be a national pact to forget the evils for which Franco’s side (and, according to this version, his side alone) was responsible.

The myth that truthfulness was impossible inside Franco’s Spain may explain why foreign narratives (For Whom the Bell Tolls, Homage to Catalonia) have seemed more credible than Spanish ones. Yet La Guerra de España was, as its Spanish name asserts, Spain’s own war, and in recent years the country has begun to make a more public attempt to “reclaim” its modern history. How it is doing so, and the role played in the process by notions of historical memory, are among the subjects of this wide-ranging and challenging book.

Franco’s Crypt reveals that despite state censorship, events of the time were vividly recorded. Treglown looks at what’s actually there—monuments, paintings, public works, novels, movies, video games—and considers, in a captivating narrative, the totality of what it shows. The result is a much-needed reexamination of a history we only thought we knew.

When opening this book, a reader could easily expect to sit down an examine Franco’s effect on Spanish art during his dictatorship. Instead, this book extends far further, into many aspects of the Franco period, so much so that art ends up being only a fraction of the story.

The first part of Franco’s crypt gives a clear introduction to the Franco period. The book titles refers to Valle de los Caídos, where Franco is buried outside Madrid, and his behemoth is discussed, along with other monuments to the time period. The book talks about Spain’s left and how the crypt is a symbol for all things horrid, while also managing to be a figure for the Spanish right, their religion and their vast power under Franco. The opening of the book delves into the subject of bodies buried in unmarked mass graves throughout Spain, and goes through the reality of digging up such a grave. The section is laced with a feeling of resignation; that after  all this time, whose bodies are they and the reasoning behind digging is uncertain. It is a subject that deserves far more opinions and time placed upon it.

The author gives a feeling that ‘memory’ is not such a simple beast; rather that the name encompasses many things. This could be certainly true, as memories and history are merely a recollection of the winners in a heated battle. With Spain being divided, by being its own enemy, all ideas, social and cultural norms, politics and attitudes are up for debate.

One chapter is dedicated to dam building in Spain under Franco. The voice of the book pulls back and forward between talking of the need to progress and the results of such ambitious, and sometimes failed, projects as well as the reality of what it did to the poorer people, who saw no benefit of the projects. This back-and-forward feeling in opinions distinguishes itself throughout the book.

What this book does do is lay out all the various elements of life under Franco, and how it is perceived in modern times. There can be no one element which accurately portrays Francoism and its effects, rather embracing that all walks of life, levels of wealth and social standing, and everyday opinion shape what is called ‘history.’ Treglown takes a (well-needed) swipe at the Spanish Biographic Dictionary, done by the Royal Academy of History in 2011. The glaring pieces of detail left out, and the additions and exclusions in this so-called encyclopaedia of Spain’s history is the perfect analogy for how Spain is viewed today.

This book does tell much of arts during Franco’s reign. To say Franco suppressed the arts could be an unfair comment. The book talks of great artists such as Joan Miró, Antoni Tàpies and Antonio Saura. It talks of Spanish art making its way around the world, to be seen by overseas audiences more so than ever before. Writer Camilo José Cela won the Nobel Prize for literature. Filmmakers Pedro Almodóvar and Luis Buñuel were able to produce their films in Spain (though Buñuel, fresh from exile, had his work again banned). The book makes little mention of artists whose arts were not selected for greatness, and why, and a recurring theme throughout the book is that women barely managed to scrape their way into the history books. While Spain had its own share of female painters and writers, it seems fair to say women were not able to make much headway in the art houses of Spain. Treglown touches on the fact a feudal system still persisted among artists; not many artists were working class, no doubt out of the need to earn a living as best they could. While notable exceptions to this class divide are celebrated, all it does is highlight the inequality of the age.

Franco’s Crypt, page 102 – ‘Besides, while in the nineteenth century all the talent painters had to emigrate, in the Franco period they were once again living on the Peninsula. Did the unexpected development occur because of or despite the regime?’

Treglown answers that the regime did neither or both. Franco allowed Spanish artists to speak and their word spread worldwide, thus creating an image of Spain. Whether Franco liked it or not, we will never truly know. The book does not dwell much on drama or performance art, or on poetry, which is a shame.

One area of considerable divided option is the author’s chapters on the transition to democracy in the 1970’s. Opinion (or propaganda) tends to say that the left were hushed up during this period, and that the voices of the people went unheard during this period. Treglown gives examples of media accounts, historical studies and publications and documentaries which spoke out in this period against Franco, and of past crimes. He attempts to show that opinions of leftist Spain did have a voice. However,  the so-called ‘pact of forgetting’ does remain in place, and those guilty were never tried for crimes, so to what effect these limited voices had is questionable. A roll-call of those in power after the transition says a lot of the effect of leftist ideas for change.

The reality of the era is that Franco modernised his country. After war in the 30’s, the violence of the 40’s and the struggling 50’s, Spain did begin to prosper in the 60’s, by becoming a US ally, with all important tourism and through economic growth. Little mention of the early 70’s, with inflation, high increases in the cost of living, and Spaniards returning home in search of work, isn’t touched upon. The book tries to sit on the fence in the opinions of Franco and his regime, in an effort to tell truths otherwise hidden. However, it shows without doubt that Spain lacked any decent authority figures for a long period. Some argue the Catholic right-wingers lost much of their hold on Spain towards the end of Franco’s reign, but a quick look who has influenced Spain since Franco, and at the laws being created in Spain in 2013 by the PP government, suggests an evil seed has been allowed to flourish. Liberalism have have got hold for some time, but the future remains murky for Spain.

Treglown should be praised for putting together a book so laden with information. This is no summer-sun read, but if you want to learn about Spain, understand the country you have moved to, or wish to make sense of a divided nation, be aware that this book is written with a biased prose. I can’t be certain it shows that Franco wasn’t the oppressor he was made out to be, but it shows that despite the regime, creativity and the human spirit continued to fight. I am a unashamed leftie and won’t praise anything Franco achieved, and this book didn’t sit well with me for the entire length.

One thought on “SPAIN BOOK REVIEW: ‘Franco’s Crypt: Spanish Culture and Memory Since 1936’ by Jeremy Treglown”