100 years ago today, on a warm New Zealand Christmas Eve, Trevor James Cunningham was born to his parents Elizabeth and Herbert of 2 Suffolk Street, Newton, Auckland. Several years later, his little sister Lorraine was born, my grandmother. Lorraine lost her beloved brother just before Christmas in 1943, on the battlefields in Italy. They say a person lives as long as the last person who remembers them, so here is the short story of Trevor Cunningham, as written by my late father.

Trevor James Cunningham – born 24 December 1913 to Herbert Gardiner Cunningham and Elizabeth Wallace Cunningham – registered for war service on 13 November 1940 in Auckland. His medical check showed he was in good general health and described as 5ft 7in tall, weighing 9st 6lb (60kg) with fair hair, grey eyes and a sallow complexion. He also required dental treatment. He was 27 years  and 324 days old.

He was the time employed as a truck driver for Shell Oil, single, and declared himself as ‘unable to ride or provide a horse’. At medical check taken on that day, Trevor stated that previous injures had been concussion in 1938 and a broken jaw in 1940. There is no record of how these injuries had occurred.

It was eight months later on 5 July 1941 when Trevor was called to report for training at the Trentham military base. Upon on his enlistment he was allocated his army number of 47638. One of this first tasks was to make a will and he named his mother as his executor, and left a copy with the base records station.

Trevor was assigned to be an Acting Lance Corporal in an Engineering and Ordinance Training Depot. The army often took into account any previous experience a soldier may have had, and Trevor’s occupation as a truck driver was taken advantage of. During his period of service in New Zealand, Trevor was alternated between being a Private, Acting Corporal, and a Driver Mechanic. As a Driver Mechanic he was entitled to one shilling a day extra pay.

In December 1941, he was sent and qualified from the School of Instruction in Trentham. He was then placed in the training role and this continued at Trentham, also having a short period in the hospital from the 18th April until May 1st 1942. There is no record for the reason of his hospitalisation.

During the period from July 1943 until he left for overseas there is no record of him having had any leave or returning home to Auckland.

When his overseas posting came through he left New Zealand bound for North Africa by way of the Panama Canal. The New Zealand army contributed to the second New Zealand Expeditionary Force. In total around 140,000 NZ personnel served overseas for the allied war effort.

The 2NZEF fought in North Africa and then was became part of the Allied campaign to invaded the Italian mainland, Trevor leaving North Africa on the 20th October 1943. The campaign invasion had begun on the 3rd September 1943 and coincided with the armistice made with the Italians who then re-entered the war on the allied side.

The invasion objectives were to draw German troops from the Russian front and more particularly from France, where an offensive was planned for the following year, and progress through southern Italy was rapid despite stiff resistance, but by the end of October, the allies were a facing the German winter defensive position known as the Gustav line, which stretched from the river Garigliano in the west to Sangro river in the east.

By 4th November the allied force that had fought its way up the Adriatic coast was preparing to attack the Sangro river position. A bridgehead had been established by the 24th November, and after heavy fighting the whole ridge overlooking the river was in allied hands by nightfall on the 30th November. 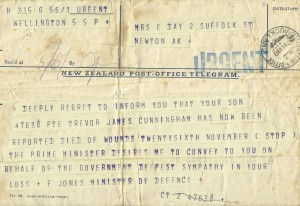 During the fighting in the battle for the Sangro river valley. Trevor was reported as wounded in action on the 25th November 1943. As a battle casualty he was admitted to an army medical base. The following day on 26th he was reported as ‘died of wounds’.

As was custom at this stage of the war, there was no records kept of details of soldiers wounds, or of any medical treatment they received or a cause of death. When a soldier was admitted to the medical station an assessment was done and only those who had a reasonable chance of survival were targeted, and others were made comfortable for further assessment. Most of these would pass away within 24 hours. Records were only maintained if the soldier was to be transferred to another medical facility. In these cases treatment already given was recorded and was forwarded along with the patient. No records of who or why Trevor were ever uncovered, but he was recorded as injured on November 25, indicating a slow painful demise. 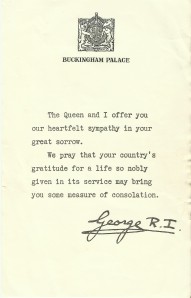 Trevor was taken to the Sangro River War Cemetery where he was buried along with soldiers from the New Zealand Australian armies. His grave with his Name, Rank and Service Number.The grave is marked with the code XV1. E. 20.

He was decorated with the following medals – 1939-45 Star, Africa Star, 8th Army Clasp, Italy Star, 1939-45 War Medal and NZ War Service Medal, all given to his mother on 14 March 1950. the New Zealand Government also paid a War Service gratuity and 200 pounds to Elizabeth Cunningham on 27 May 1946. His gloves and a strand of his hair also arrived home to his mother. 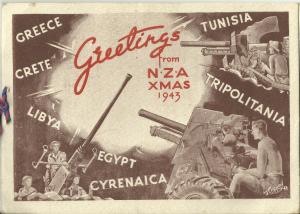 Trevor send this card home to his mother and stepfather, which would have arrived after his death

My father Scott never made it to the Sangro river on his first and only trip to Europe in 2006, but longed to return. Now in his place, I am planning to be the only relative in my little family that has made the journey to find the grave of Trevor Cunnginham. Happy 100th birthday uncle Trevor.

7 thoughts on “From Newton, Auckland to the Sangro River, Italy”